With a background in retail with Waitrose, Toby’s vision was to produce an innovative, reliable new product based on a simple idea: to help owners follow the whereabouts of their pets using a GPS device attached to the animal’s collar and an app to track it with.

Toby realised early that the journey from idea to saleable product could potentially be a long one, so he was going to need expert help and advice to design, prototype, test and manufacture the products so they could be brought to market.

The first product scheduled to come off the product line was the Tracca Dog. 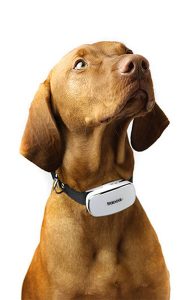 Tracca was originally introduced to Prototype Projects in 2014 by a local contact at advanced materials supplier Mouldlife, part of the international Group Gazechim.

After researching Prototype Projects on the web, Toby still wanted to review other possible suppliers, and so cast around the regional market for suitable partners.

Having concluded his discussions with a further three possible suppliers, it was clear to Toby that the best fit for the business would be Prototype Projects.

The key reason for this in Toby’s mind was that while the other prototyping firms he’d spoken to were clearly capable of delivering to his requirement, Prototype Projects stood out for their ability to share his vision.

A partner that’s part of the project

From the outset a key requirement for Toby Mills and the rest of the team at Tracca was to find partners that could be “part of the project” – i.e. involved with some of the same drive, passion and desire for success that they felt.

“When I spoke to Gary Turner at Prototype Projects”, says Toby, “he listened to my requirements and ideas for the Tracca products and then clearly explained the process we would need to follow.

“As a result, I really felt that Prototype Projects were bought into my vision from the start, and that they would help me to understand some of the critically important technical detail.”

A partner that listens and recommends

The earliest requirement was for Tracca product was for a product design to be produced.

Involving both designer and prototyping specialist in a consultative process at the outset was a key strategic decision which led to the first Tracca product coming to fruition in less than a year.

From receipt of the earliest CAD file, the iterative development process benefited from suggestions both from Prototype Projects and the product designers. It meant that design refinements could be identified, considered and taken on board and new models could be produced and tested.

“The first vacuum cast models we produced were almost there,” says Toby, “but we still needed a few refinements to get the Tracca to where we needed it to be.”

The product had to be technically robust and rugged enough to withstand being worn by a dog or cat 24 hours a day in all conditions.

The aesthetics of the Tracca product were also important as – understandably – many pet owners can be particular about the appearance of their pet and anything including a collar GPS tracker that it might wear.

Finally the price point needed to be as low as possible to make the Tracca affordable for the 9 million (24%) of households with a dog and the 7.9 million (18%) cat-owning households in the UK.

All of these requirements were built into the product which was then tested widely in the UK by vets and kennels.

Concept to market in 12 months

With the brand new Tracca product designed, prototyped and productised in less than a year, Toby Mills was delighted with the result.

In his own words, Tony said Prototype Projects have “done everything possible to help, and have offered recommendations right from the start.”

With such a successful product development process behind him, Tracca are pleased with the nature and timing of their arrival to market in the UK with Tracca Dog and have ambitious plans for future products.

“I could not be more pleased with our choice of Prototype Projects as a partner throughout the development process of our Tracca products. I’ve felt that they have been integral to the project from day one, adding value to the process with their recommendations at key stages and all the time keeping costs to a reasonable level. As far as true project partnerships go, Prototype Projects have been right there with us in the thick of it and I’d recommend them to any company – start-up or otherwise – wanting a reliable and experienced prototyping partner for their product development project.”

Talk to us about your next prototype project on 01763 249760. We offer next day dispatch for SLS, SLA, FDM and Figure 4 parts. We can advise you on your choice of prototyping technology and can also help you optimise your designs for prototyping.