For years, Tony Chau had been looking for a single, multifunction flash modifier to achieve the atmospheric and evocative results needed by his clients.

By 2012 he had to accept that there wasn’t any product in existence that could do the job he needed, so he decided to develop his own flash modifier. With that decision, Tony began his two year journey from photographer to inventor, to investor and, ultimately, entrepreneur – and BounceLite was born.

To ensure he could always achieve the photographic results he wanted, Tony Chau routinely carried a variety of flash unit modifiers, diffusers and filters, switching between them in often fast changing situations.

Carrying with him all the different pieces of equipment was an inconvenient and cumbersome part of his job which Tony knew could be addressed if only a single, multifunction flash modifier could be found. An ‘all-in-one’ unit would combine all the functions into a single, easy to carry attachment which would produce all the required lighting effects and photographic results he wanted.

But in 2012, after years of searching and finding nothing that quite matched his needs, Tony set out to invent what he required himself and started looking for partners that could help him.

Coming up with the idea for the BounceLite design was just the start. Tony now needed to realise his vision and have the product designed and prototyped.

He began looking for suitable design and prototyping companies and found Prototype Projects on Google. First impressions were that this appeared to be the sort of company he was looking for.

During his first phone call with Prototype Projects Managing Director, Justin Pringle, Tony talked through his early ideas requirements. Never having been through the product design, prototyping or development process before, Tony knew he needed a consultative and supportive partner to assist him in navigating through it.

Tony was immediately impressed by the helpful, accommodating responses he received to his questions from Prototype Projects, and with the advice about his options for taking his project forward.

He felt that Prototype Projects was the right company to work with and made the decision to partner up with them in the creation of the BounceLite.

From photographer to inventor to entrepreneur 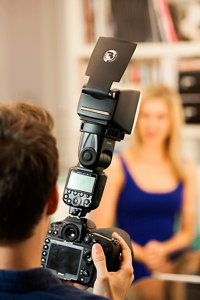 It wasn’t long until the BounceLite project started to come off the drawing board. Prototype Projects helped Tony select a design partner to produce the product specifications, and continued to offer advice and support through two rounds of prototype iterations.

The early BounceLite models were created mainly using the SLA process. Prototype Projects supplied the first models with a detailed finish i.e. painted to look like and feel like a full production model. Vacuum Casting was used to produce the adjustable strap and mounting blocks in a flexible Polyurethane material.

Once Tony and his design team were satisfied with these early concept models, he needed further, more robust models for field tests and demonstration to potential customers. To achieve this Prototype Projects produced a full suite of silicone tools for each component, including 2 shot over mouldings, meaning that all parts could be produced in strong polyurethane materials.

In 2014 an opportunity arose to exhibit advanced prototype models at the Photokina fair taking place in Germany in September. Photokina is the world’s largest imaging and photographic tradeshow with an expected 200,000 visitors from 150 countries.

The key requirement was to show off prototype models of the BounceLite that would attract potential customers and specialist photographic distributors who could generate volume sales of the product around the world. These models must look, feel and behave like the real thing.

It was a once-in-two-years opportunity as the next Photokina would not be until 2016.

The goal set to Prototype Projects: produce 6 fully functional models including the diffusing lens in time for the show. These models were made to the latest design which had evolved and improved following testing of the first round of prototypes.

“My idea for BounceLite came about because I needed a practical solution for a very real problem that I had been facing for years – and which I know others in my industry also faced.

“Prototype Projects helped me to realise my idea from scratch, helpfully and clearly explaining every step I would need to go through in language I could understand. From the first model to the advanced prototypes we showed at Photokina, I could not have been happier with my experience.

“I’ll never forget the amazing feeling of seeing my first product. It works like the real thing and is a fantastic-looking, stylish flash accessory for every professional photographer.

“Now I’ve got distributors interested in 15 countries – I couldn’t have got this far without Prototype Projects.”

Our 3D printing technologies can be used for both rapid prototyping of early-stage concept parts and additive manufacturing of production parts and components. To complement our technology services we provide integrated consultancy, support and advice on material choice, process selection and design optimisation. A range of finishing options is available including surface smoothing, lacquering, dye colouring, spray painting and hand finishing.

Clients include design consultancies and product designers and design engineers in the pharma-medical, oil and gas, automotive, aerospace and consumer manufacturing sectors.

Talk to us about your next prototype project on 01763 249760. We offer next day dispatch for SLS, SLA, FDM and PolyJet parts. We can advise you on your choice of prototyping technology and can also help you optimise your designs for prototyping.